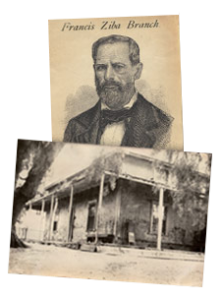 While bear hunting south of San Luis Obispo in 1826, Francis Ziba Branch discovered a clearing with breathtaking views. Though it was an impassable swamp at the time, Branch envisioned the potential of the land. Eleven years later, Branch was granted 16,955 acres by the Mexican government and settled his wife Manuela and son Ramon into Rancho Santa Manuela.

Living off the land became a prosperous way of life for the Branch family and many ranchers traveled great distances to visit the famous Rancho Santa Manuela. The Biddle family bought much of Rancho Santa Manuela in 1879 and continued to run a successful cattle ranch. Recognizing the land’s agricultural potential, Oliver Talley leased part of the Biddle family’s premium farmland in the late 1940s and established Talley Farms. Over the years, the Talley family purchased and cultivated pieces of the land, deliberately selecting which vegetables, fruits or wine grape varieties would flourish in the diverse soils. Today, the Talley family owns and operates this prized property and their commitment is the same as it was for Francis Ziba Branch—to do the very best with the land while preserving its special beauty.